On Tuesday, Kanye West took to Twitter to clarify that he introduced Candace Owens to the person who made the logo for “Blexit,” but the person didn’t want their name on it so they used his instead.

He continued to express that he had been used and announced that he would be distancing himself from politics and place his focus on being creative.

On Wednesday, Owens put out a blog post titled “808s and Heartbreak” apologizing to Kanye for any confusion that may have been caused.

She said, “If I had to imagine what it would feel like to have a bullet pierce my heart, it would be exactly like the moment I learned Kanye told the world he felt I had used him. I wouldn’t wish the way I felt last night upon my worst enemy. I never once said that Kanye designed the t-shirts for BLEXIT. This is a lie that seems to have made its way around the world; a lie I would like to again correct for the record.”

Owens continued, “Kanye was completely right to feel used in that regard and as I have done personally, I would like to publicly apologize to him for any undue stress or pain the effort to correct that rumor has caused him, his business relationships, or his family. He simply never designed them.”

Towards the end of her blog post, Owens stated, “To those who have donated and supported BLEXIT, I would like to clarify that in no way are you supporting the work of Kanye West.”

As we previously reported, the Blexit designs first made its debut at the Young Black Leadership Summit in Washington D.C. The campaign advocates for African Americans to exit from the Democratic Party.

Owens had previously said to Page Six, “Blexit is a renaissance and I am blessed to say that this logo, these colors, were created by my dear friend and fellow superhero Kanye West.” She was also seen on video crediting Kanye West for the logo and colors.

I introduced Candace to the person who made the logo and they didn’t want their name on it so she used mine. I never wanted any association with Blexit. I have nothing to do with it.

My eyes are now wide open and now realize I’ve been used to spread messages I don’t believe in. I am distancing myself from politics and completely focusing on being creative !!!

Candace Owens just issued a statement in response to Kanye West calling her out and straight up lied about the words that came out of her own mouth: 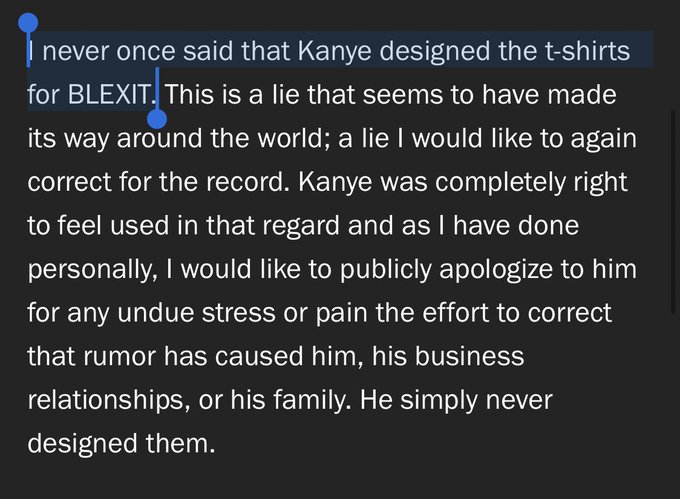 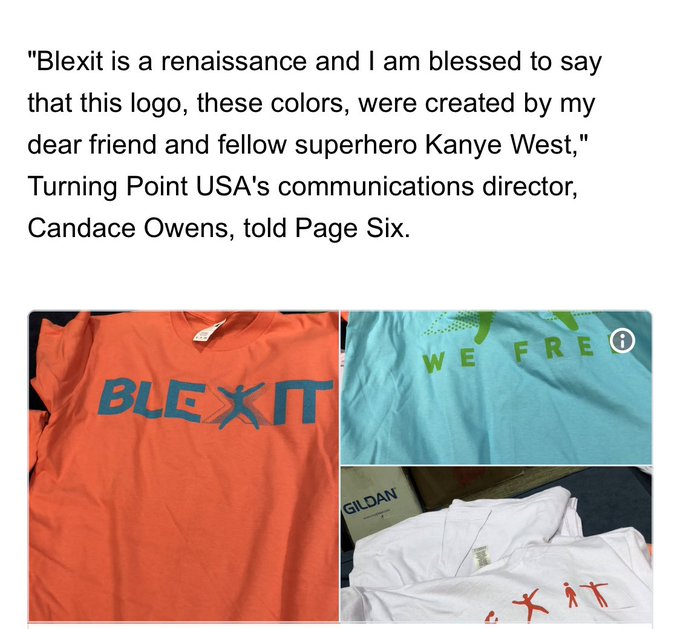 Candace Owens in her statement: “I never once said that Kanye designed the t-shirts for BLEXIT.”

Candace Owens just days ago: “This logo, these colors, were created by my dear friend and fellow superhero Kanye West.”